Oh Barcelona, you delighted and disappointed in the same bite!

As the Euros were quickly being depleted, we found ourselves eating in more often.

We went to the supermarket and even bought some canned goods (my choice, Deric was wary).
I grew up on many a canned delight – corned beef hash, Spam, ravioli, Beefaroni, Spaghettios, Campbell’s Noodle Soup, etc., so occasionally, in moments of weakness, I will turn to the humble can.

Luckily, these cans put their American counterparts to shame!

We had vegetarian beans,

pair those with some chorizo, rice, and a simple salad with lemon vinaigrette and you have a surprisingly amazing dinner!

Deric didn’t care much for the chorizo, said it was too greasy. I loved it! It tasted like the Hungarian smoked sausage that my dad would always bring home when we lived in Chicago. He would also have people ship it to him when we moved to Portland. Even my pickiest siblings would eat this sausage when paired with feta cheese and the softest french bread.

Luckily, Luke has apparently inherited my sausage gene – a bond I hope we will always share. He walked around the entire apartment, chorizo in hand, happily smearing orange grease all over.

Another supermarket delight included this ice cream confection that tasted mildly of cappuccino and custard.

After visiting Park Guell, we saw this window display, and I stopped in my tracks… and asked Deric to go get one. They were called Rocs de Gaudi, and were these really sweet almond meringues. We took a few bites, decided to finish it later with coffee, forgot about it, it smashed into a bazillion crumbs, and ended up in the trash; tragic. 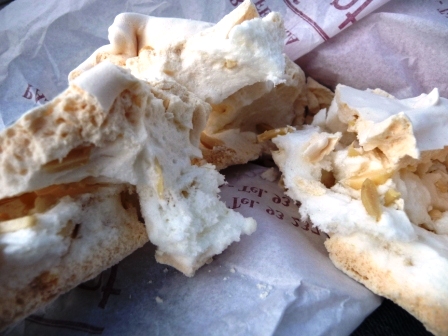 And then there was the great Paella hunt.

I was determined to find the best paella on a conservative budget – not meager, just slightly limited. So I googled it. And I found a blog, which I will leave nameless, in which the author called herself an obsessed with paella. And since it appeared she had tasted several paellas in Barcelona, I decided to trust her… eh… wish I hadn’t. I was recommended a restaurant that served an 18 euro/per person seafood paella. Eh… it was okay. Just okay. It was rice, that tasted like seafood, served in a paella pan.

Maybe it was my weakened taste buds due to a sinus problem.. but the paella did not taste like what I expected paella to be. I had watched numerous Food Network shows that showcased paella, and how it’s supposed to be creamy, yet have a crust on the bottom… and it was that crust that I missed in this paella. Was it a good rice dish? Sure. Was it great? No. Will I have food blog trust issues from now on? Yes. 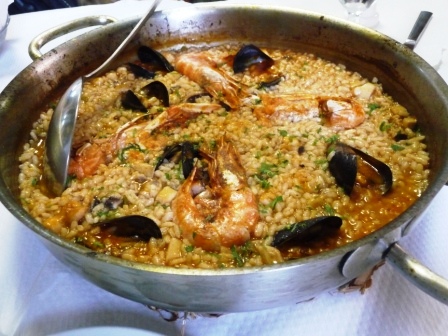 So, in my disillusionment, I vowed to find an “el cheapo” paella that could satisfy me. So we found one for 8 euros. And it was bland. But it did have the “crust” I was looking for!

In the end, I have decided to end the search for great paella. After all, how good can paella be? It’s just rice, and saffron. And I doubt it could stand up to the intense flavors of Thai cooking, which I would prefer any day to Mediterranean flavors.

But let’s end this on a positive note!

Best food I had in Barcelona:
Patatas Bravas! Fried cubed potatoes topped with a creamy yummy chili sauce! So good! In fact, it erased every bad memory of paella. It’s typically served as tapas, and we had it twice! Had we tried it earlier, I would’ve had them every day, maybe twice a day! 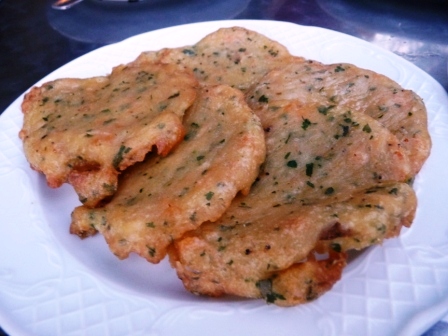 And on that note, I bought a tapas cookbook and plan to someday throw a tapas dinner party, and maybe – if I run out of everything else to do, I might even try to make my own paella that will rival that of Barcelona.

I am a wife, mother, sister, aunt and Jesus lover. I like to create and "beautify" things, but mostly I like to give new life to rejected clothing or objects. This blog is the outlet for the frugal, frustrated artist in me.